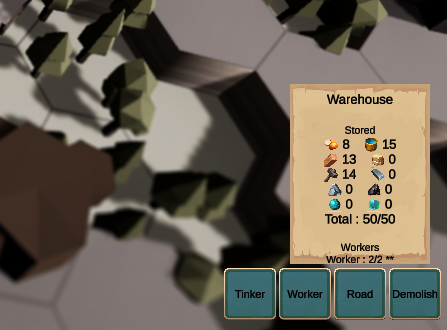 "Welcome to my first Friday as a full time game developer!"

Hello again and welcome to my first Friday as a full time game developer!

Well, what a week this has been!  The short version is that I added the 'end screen' (it took about 5 minutes!) and changed the planet generation to use regular hexagons rather than 5, 6 and 7 sided tiles, and then still had 3 days up my sleeve!  So I've also gone through and added a whole bunch of usability and graphical features that have been sorely missing.  For example:

- Buildings now face the road they're next to, and the road extends 'under' the building, which does wonders for tying the village together into a cohesive whole.  The citizens also enter and exit the buildings by the door now :)  You can also see the new hexagonal tiling scheme in action.

- I've added a (very early) effect that highlights tiles that can be built on, when you're in the process of placing a new road or building - this makes it way easier to work out where you can build things, but also means I'll be able to significantly simplify some of the steps in the tutorial - rather than having to describe where you can place things, players will automatically be able to see.

- When you're picking which building to place, buildings that require resource you don't have get their resources printed in red (like the Well above, which needs Stone that I don't have).  And yes, the layout of those cards is indeed a horrible mess.

And finally, I changed the way that Warehouses and Ships store their resources.  It used to be that they had a maximum number of each resource (e.g. they could store 20 food and 20 wood and 20 coal and ...), but now they just have a single number for how many things they can store (50 in this case), which makes a lot more sense to me.

On top of all that I had meetings with a couple of different game developers that are mentoring me, which is super amazing.  The indie game development community, both in New Zealand and around the world, is just the most amazingly helpful place!

That's enough for this week.  I'm really looking forward to doing this again!